Hi and welcome to our weekly Bear Cam blog. We will be publishing this blog every week with a review of the previous weeks Bear Cam highlights. Brought to you by your bear cam Mods, LaniH and GABear. This weeks highlight video can be viewed here.

Are you ready for Fat Bear Week??  Our bears are sure looking ready! And just in time too, since the Fat Bear Bracket has been posted by Katmai National Park.  We’re posting a copy of the Bracket here. You can go to the Katmai Facebook page and learn about the voting process that will begin on Wednesday, October 2 and continue until the crowning of the 2019 Fat Bear on October 8. 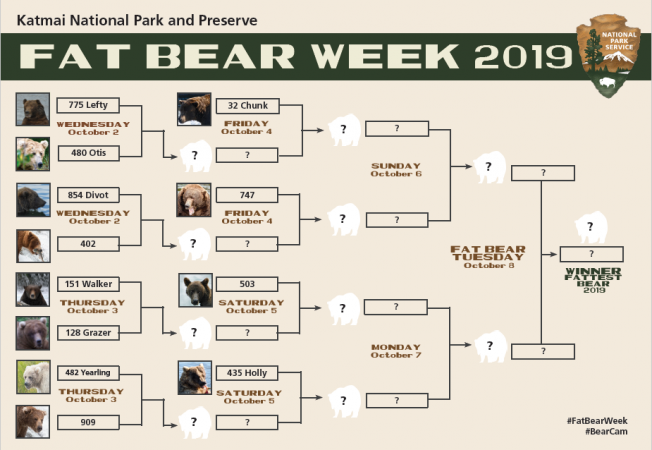 Meanwhile, it’s time to start campaigning for your favorite Fat Bear!!  Get started on those campaign posters! We’d love to see your posters in the comments on explore.org’s Bear Cam page and also please post them on this blog link here so everyone can enjoy them all in one place!  (If you can’t post on the blog, email your posters to feedback@explore.org and they can add them.)

Along with the review of the week, we’ll showcase some of the Fat Bear Contestants with photos this week and next week.

Undoubtedly the most watched highlight this week was a very up close and intimate view of sow 273 nursing her 3 spring cubs.  They were very close to the cam and remained in view playing, sleeping and nursing for a long time. 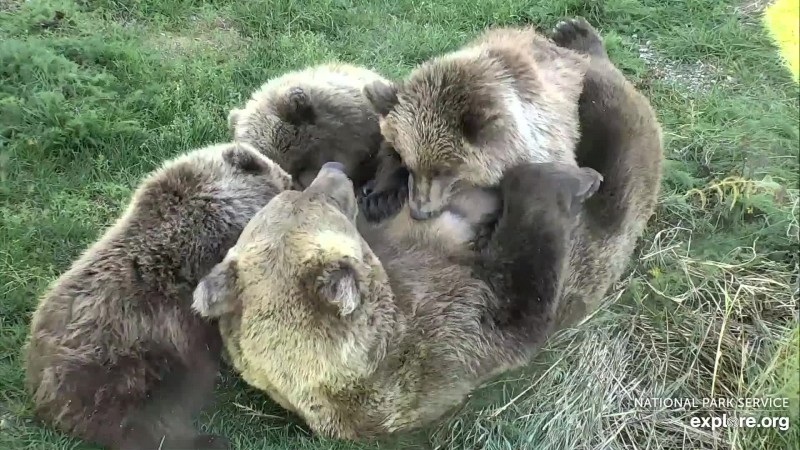 273 nursing her coy Snapshot by Shel_ Sow 402 took her 3 yearling cubs up to the falls area a few times this week.  During those visits, 402 demonstrated her diving skills by diving for fish in the Jacuzzi.  She has a great kick dive and can keep her head under the water for close to 15 seconds! She often is successful in coming up with a fish.  We’re glad to see this hard working mom in the Fat Bear Week brackets.

One of 402’s cubs seemed to be inspired watching its Mom’s fishing skill and chased after a fish flopping in the shallow water near the falls platform.  It too was successful and came up with the fish. 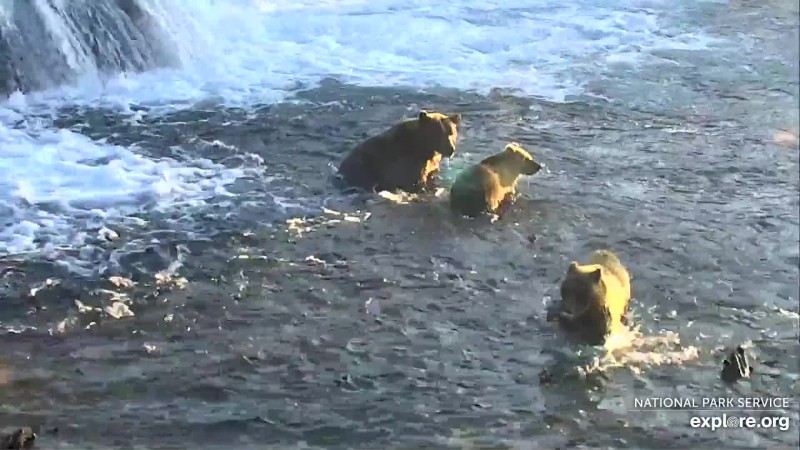 402 cub with a fish Snapshot by GreenRiver

We were also treated to views of 708 Amelia and her cubs sleeping. 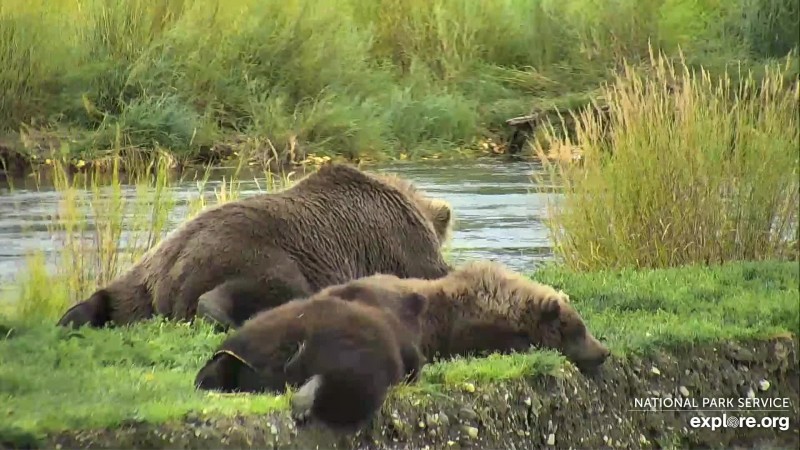 We think sow 482 may have been darted with a biopsy dart this week to obtain DNA for the ongoing Genetic research project. (The dart snips a DNA sample and then falls out.)  She reacted by appearing startled and running a few steps, but it didn’t disturb her much at all.

Is there anything cuter than a standing bear?  Yes,  standing cubs!! Especially standing cubs with a salmon who seem to be startled by something.  719’s coys demonstrate.

There was an interesting interaction this week between 719 and her coy, and subadult 821.  821 approached 719 and family near the platform on the Lower River. Just last season, the two of them were both subadults and had friendly interactions.  719 allowed his approach, which was different than what we have observed from other sows with cubs who seem uncomfortable and defensive about having any males get near them.  When 821 appeared to turn to approach 719’s cubs, however, 719 turned on him and jumped up and bit on him, letting him know this was not acceptable behavior. Mike Fitz said this about the encounter:

“….. When I watch the extended replay, it seemed that 821 was curious and had playful intentions regarding 719. In turn, 719 didn’t seem to dissuade 812 from his approach initially. Mother bears seldom allow other bears to approach that closely, especially when the other bear is a subadult male, so that was unique. Perhaps 719 allowed it because she was familiar with 821 from previous years and had played with him before. Whatever the reason, when 821 seemed like he was going to chase the cubs, 719 intervened and sent a clear message to 821 to stay away. Throughout the interaction, 719’s cubs didn’t seem comfortable with the close proximity of another bear. …. I can’t recall an equivalent situation that I’ve witnessed.” 719 and 821 interact Snapshot by Bookmom 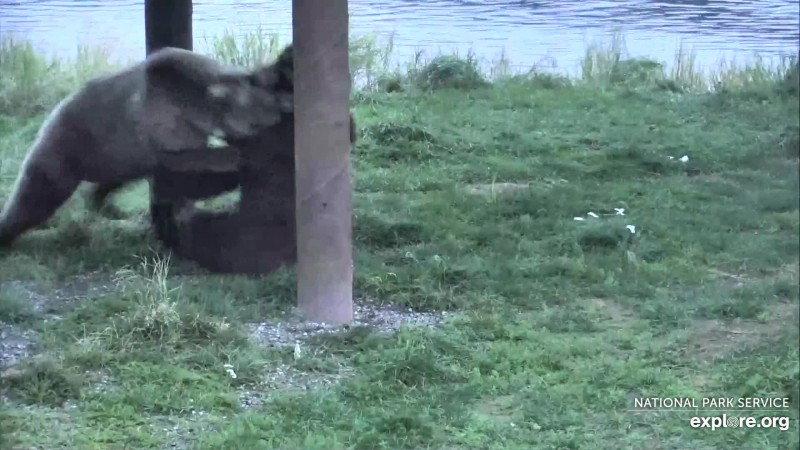 719 defends her cubs from 821 Snapshot by CamOP Nan

151 Walker continued his effort to be in charge of who fishes the lip of the falls by once again intimidating a subadult trying to fish there, who was then forced off the lip. 503 continued his effort to engage older bears in some play, by getting 68 to play with him. 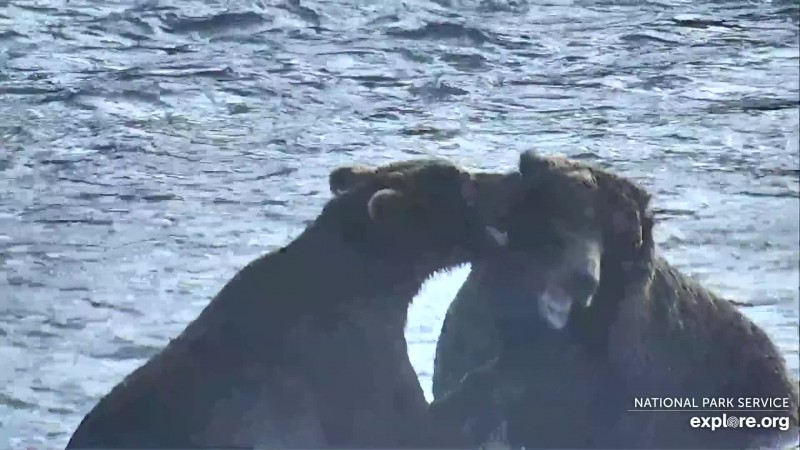 503 and 68 play fighting Snapshot by Resch

The unknown adult male with the large shoulder hump that we observed in the summer made an appearance at the falls this week.  So far, we’ve only seen him on the cams that one time, very late in the evening. He was looking good though. His shaggy coat had filled in and he’d gained a lot of weight. 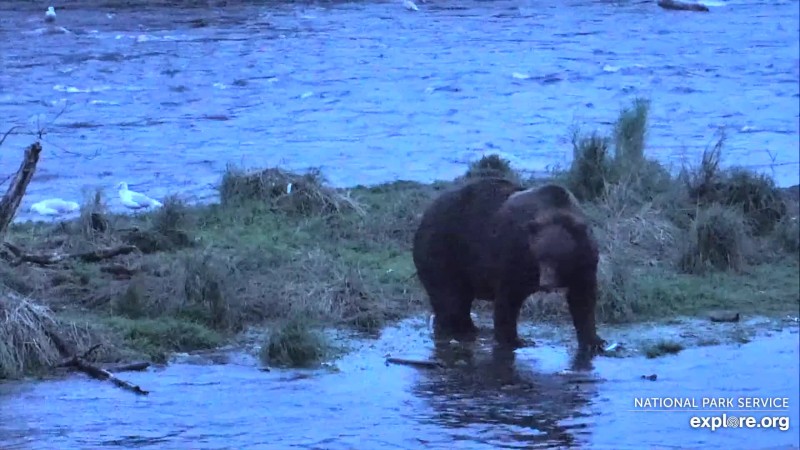 With Fat Bear Week starting Wednesday, a number of the contestants have given us good views this week.

480 Otis was busy fishing (and resting) in the Lower River.  He wants to challenge for the crown yet again. 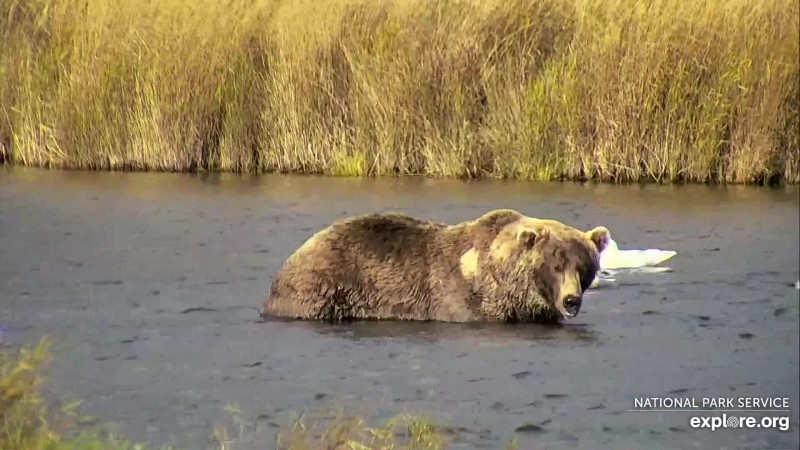 435 Holly is obviously campaigning and gave quite a view to show off her readiness to make a run (okay, make that a waddle) for the Fat Bear Crown. 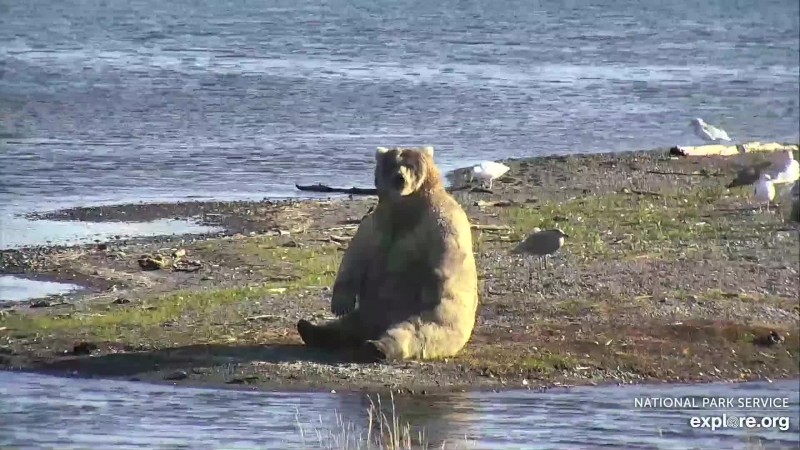 Subadult 909 made the brackets this year.  If speculation that she is the offspring of last year’s Fat Bear winner 409 Beadnose is correct, 909 has the right genes to make a run for the Fat Bear crown. 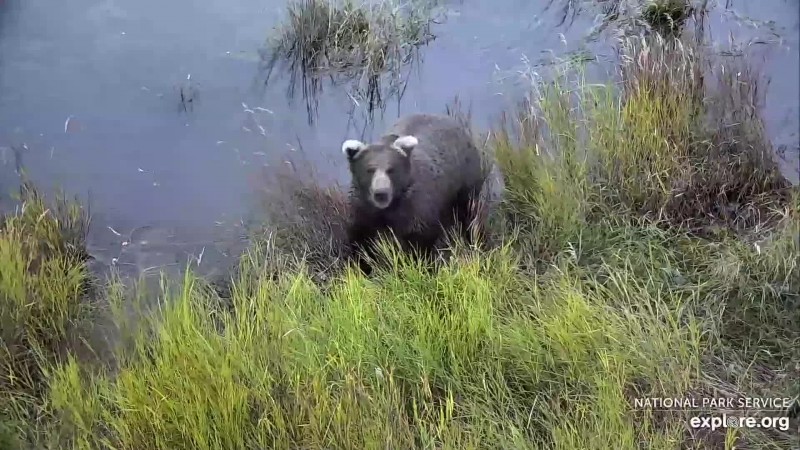 909 says don’t forget about me, I’ve worked hard on the lip to win Fat Bear Snapshot by LaniH 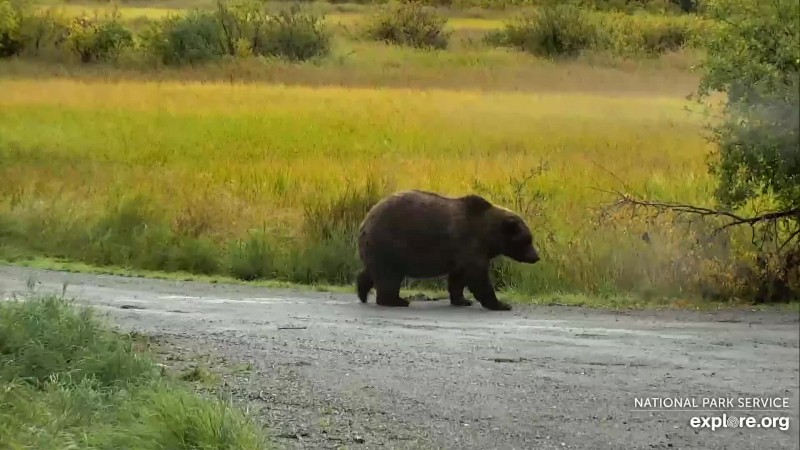 151 Walker is getting good cam time on the lip of the falls to show off his Fat Bear Week readiness. 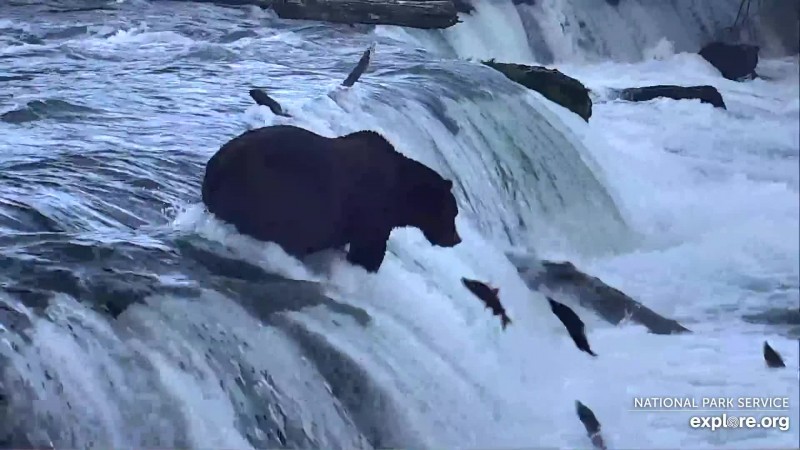 Thanks explore.org and Katmai NP for bringing us the great Lower River views this season.  We’ll miss these views as these cams go offline this weekend, and look forward to seeing them again next season.  We’ll keep watching the Fall, Riffles and Dumpling cams for as long as the solar power holds out. 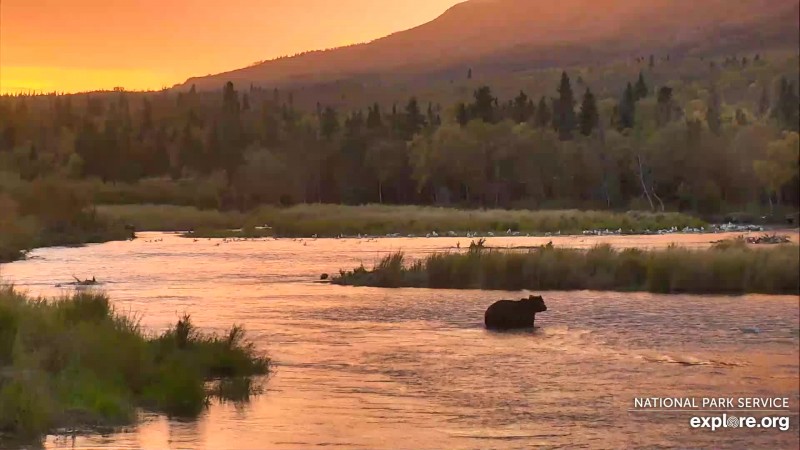 Beautiful sunset on the lower river Snapshot by Shel_

Just how important is an individual animal? How might the famous bearcam bears influence conservation efforts? Mike Fitz talks about this survey here.

Please help us answer those questions and more by taking this survey.

Are You There Brown Bear

Mike Fitz has launched a Community Science Project where your snapshot can help monitor information about the bears you see on the cams.

To participate: After taking a Snapshot, click on “Community Science” below the snapshot.

The 2019 Bears of Brooks River ebook is available for downloading here.